Board Briefs and Alliance Organization 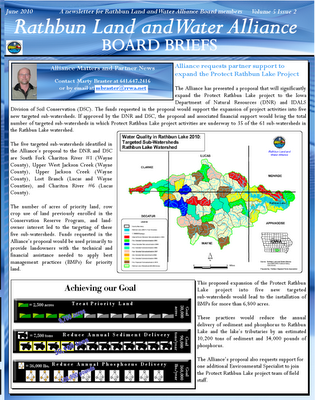 At the Rathbun Land and Water Alliance's January 12, 2018 quarterly meeting, John Glenn retained his position as RLWA President, Kim Fransisco retained his position as Vice President, and John Sellers was elected to the position of Secretary/Treasurer to fill the position vacated by Bruce George, who resigned from the RLWA Board. At large directors were reappointed. Bruce George's vacancy will be filled in the near future. 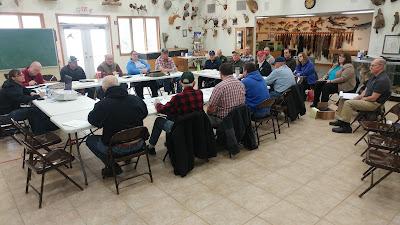 The RLWA Alliance members are the Rathbun Regional Water Association, Inc., Soil and Water Conservation Districts and County Governments in the Rathbun Lake watershed. Alliance partners at the local, state and federal levels include the , Iowa Department of Natural Resources
, Iowa Department of Agriculture and Land Stewardship's Division of Soil Conservation, Iowa State University, USDA Natural Resources Conservation Service, USDA Farm Service Agency, and US Army Corps of Engineers. Alliance activities are governed by an eleven member board of directors. All Assistance avaiable through the Alliance is offered on a non-discriminatory basis. The Alliance is organized as a nonprofit corporation under Iowa Code 504A and Section 501(c)(3) of the US Internal Revenue Code. Information about Alliance members, partners, and organization is available through the links on this page.
Board of Directors

Contact the Alliance
For additional information regarding the Rathbun Land and Water Alliance and the Alliance's efforts to protect water quality in Rathbun Lake, click on any of the links listed below.

Marty Braster, Environmental Management Specialist/Support Services Officer, RRWA
Marty Braster is the Support Services Officer with Rathbun Regional Water Association (RRWA).  One of Marty’s responsibilities is to coordinate the utility’s source water protection activities.  Marty has been with RRWA for close to 20 years.  Prior to joining RRWA, Marty worked with the USDA Natural Resources Conservation Service in field offices and for the agency’s Resource Conservation and Development Program.
Velvet Buckingham, Environmental Specialist, Protect Rathbun Lake Coordinator
Velvet Buckingham is currently an Environmental Specialist with IDALS-DSCWQ.  One of Velvet’s main responsibilities is working with landowners to coordinate the installation of best management practices in the watershed.  Velvet has worked for IDALS since 2008, and been a project coordinator with the Rathbun Lake Watershed project since 2004.  Velvet operators her own cow-calf herd, and is an active partner in her family’s farming operation which consists of row crop production and cow-calf herds in the watershed.
Brian DeMoss, Environmental Specialist, Protect Rathbun Lake Coordinator
Brian DeMoss is an Environmental Specialist with the Lucas County Soil and Water Conservation District.  Brian has been a watershed coordinator for the project since 2011, and cooperates with landowners to install best management practices in the watershed.  Prior to joining the Rathbun Lake Project, Brian was a lead watershed project coordinator for the Fox River Watershed project from 2007-2011.  Brian also has work experience on local farming operations with row crop, cow-calf herds, and cattle feedlots.
Kathleen Chester, Education and Outreach